Today was another day spent playing cards.  Aunty and I also took a little road trip to the supermarket and grabbed more wine as we were out!  Saw another Aunty while I was in town so reallly nice to see her and I always remembered that I needed to get my  and also managed to pick up my NZSecretSanta gift!

I have participated in NZSS which in the beginning was run by a guy named Sam but now it's run by NZ Post and it's still awesome.  You participate via twitter and get given a random person to gift.  I had a lot of trouble trying to think of what to get for my NZSS person as they did not put any hints on what they wanted and the only things they seemed to tweet about was my only clue on what to get for them.  In the end i picked up a couple things that were related to their interest and a block of chocolate. Not easy at all but it was fun to be challenged and try to figure out what it is they would or could want. 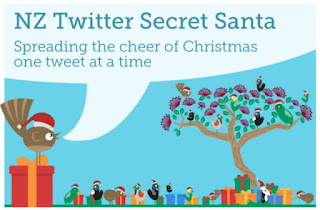