For the last little while I have been trying to get Scratch to feed the puppies. It's been a bit of a mission but pretty much everyday this past week she has been feeding them which is good.  She gets a bit restless after a few minutes and it does take a little while to get her to actually sit but once the puppies are on she's good to go and manages to feed them.

There are days where she doesn't want to feed them at all so I've ended up having to bribe her with food in the hopes that she will stay and feed the puppies long enough to give them enough food/energy to get them through the next few hours.  At the moment we are feeding around 3/4 times a day with their last feed being around 8pm.

All in all the pups seem to be doing okay. Marley (the smaller one) doesn't seem to be getting any bigger or stronger but Sox on the other had seems to be getting more fatter than anything else.  They're both struggling to walk so I am hoping that this improves over the next little while but totally love having the puppies around. 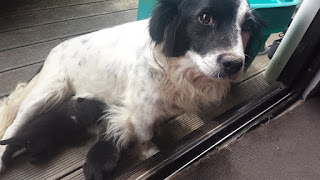 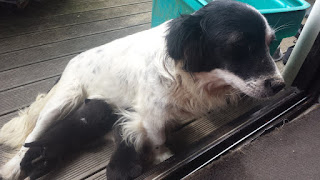 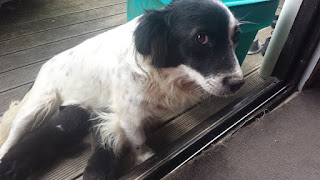 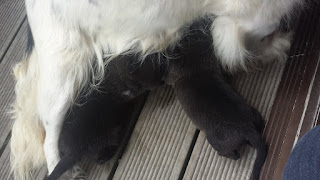