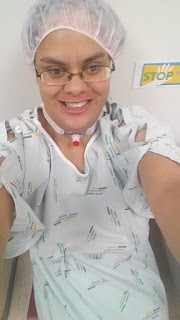 When I first moved back to the far north I wasn't looking forward to it at all. Don't get me wrong I was grateful that for the interim I had a place to come to and that my grandparents were okay with taking me on for who knows how long. In the space of a couple of a month my whole life had pretty much changed. I went from having my own home, starting a brand new job that I worked had to get, a relationship that even though at the time it was a bit rocky it was still a relationship none the less, an amazing nanny job with a family that I loved to pretty much having to give it all up. I felt sorry for myself and I hated that in such a short time my whole world had done a full 360 and my life was about to change. Over the next couple of months as much as I loved being here with my grandparents and being able to spend time with them at the same time I missed the life I had before I got sick. I missed the normality and routine of what my life was and what I was so use too. Now though I sat here dealing with the whole not working, not having friends around, the relationship I was in ended, trying to hurry the hospital along to get this trachy out because to be honest I was over it. I was done and I just wanted it to all be over and done with. Fast forward to today and I'm in a much better head space than I was when I first got here. I have LOVED being here with my grandparents. I've got use to having the trachy. I don't feel sorry for myself and even though I miss work and friends I'm grateful that I still have people and friends who keep in touch. My life isn't the same as it was 10 months ago but at the end of the day I'm alive, I can breath, I have a home and there are so many things I can and am grateful for. I have seen more family these last few months than I have done in my entire life. Family who I hardly ever saw unless there was a funeral. Life really has been great. I've even had the opportunity to travel to Wellington a few times.

I use to be insecure about the trachy or worry about what people thought. To some degree I still feel a bit insecure about it but for the most part if people ask I am happy to tell them why I have a trachy and once they know they don't tend to ask anything more. Then there are the children who stare but generally a lot of people hardly ever notice I think it's my own insecurities that make me thing people only ever see the trachy when they look at me.

In the space of 10 months I've had 5 lots of surgery and every surgery even though I always have high hopes of it being successful to the point of where the trachy will come out it unfortunately hasn't come to that yet. That's not to say that things haven't improved because they have. The surgeries I had where steroids were injected directly into the scar tissue and done every 2 weeks for 3 sessions has really helped with the scar tissue. I am also on 15mg of methotrexate which I take every week as well as folic acid which when speaking with my surgeon she has said that on top of the injections as well as the methotrexate has really helped with the scar tissue growing back.

Last week I had a follow up appointment with Jacqui and in a month's time we will be going in for more surgery. Even though the scar tissue isn't growing back my vocal cords still remain incomplete so there is no active abduction on either side. You can see them trying to abduct but nothing happens. The surgery Jacqui will do will be a posterior glottis interposition flap. Don't ask me what it is but basically she'll chop a flap, fold it over and hope that that gives me more room for air to get in and then we will slowly discuss and talk about decannulation. At the moment the gap isn't big enough for me to have the trachy out but I am hoping fingers crossed that this next surgery will be the last one we have and then we can go from there.

Life is slowly looking up and even though it's nearly been a year I'm grateful that I have the support I need to get me through all of this. That I'm here, alive and can breath. Things could be so much worse. All I can do is stay positive and hope for the best.
Posted by Teesh at 15:36:00